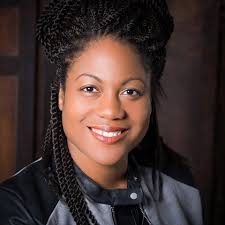 Austin Channing Brown is a leading new voice on racial justice, and author of I’m Still Here: Black Dignity in a World Made for Whiteness. Austin is committed to exploring the intersections of racial justice, faith and black womanhood. Her workshops are one of a kind, infused with justice, pop culture, humor, and truth-telling. Whether she is being interviewed, lecturing, or leading a workshop, Austin is sure to elicit a full range of emotions as she invites you to celebrate blackness with her.

Her first book released in May 2018, shot to the top 20 of Amazon’s bestsellers list. For months it has continued to sit in the top 20 in “Christian Social Issues” and “Memoirs of Social Activists”. I’M STILL HERE has received acclaim from Kirkus, Publishers Weekly, Booklist, and a host of other reviewers. Even Chelsea Clinton and Brene Brown have tweeted about this memoir. I’M STILL HERE has been featured in Religion News Service, On Being, The Chicago Trib, Shondaland, Popsugar, Relevant, BitchMedia, WNYC and more. Austin is excited to unpack the themes of I’M STILL HERE with her passionate readers. Her writing can also be found in Sojourners Magazine, Relevant Magazine, and other places around the web. Book her to talk about racial justice, black womanhood, or the writing process- just know Austin holds no punches as she equally challenges and invites listeners through story.

Austin attended North Park University where she earned a degree in business management. She also has a masters degree in social justice from Marygrove College in Detroit, MI. Since earning her masters, Austin has worked with nonprofits, churches, and universities for the advancement of racial justice and reconciliation.