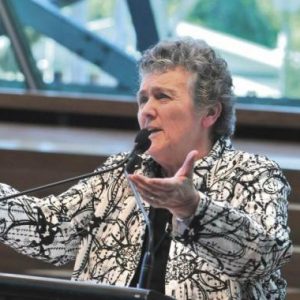 The latest thoughts from Joan:

Joan Chittister is one of the most influential religious and social leaders of our time. For 40 years she has passionately advocated on behalf of peace, human rights, women’s issues, and church renewal. A much sought-after speaker, counselor and clear voice that bridges across all religions, she is also a best-selling author of more than 50 books, hundreds of articles, an online column for the National Catholic Reporter, and a blog for the the Huffington Post. She has received numerous writing awards and honors for her work, and is a noted international lecturer as well as a former fellow at St. Edmund’s College, Cambridge University, England.

In 2015 Sister Joan was the featured guest of Oprah Winfrey on “Super Soul Sunday.” She has appeared on “Meet the Press” with Tim Russert, “60 Minutes,” “CBS News,” “NOW” with Bill Moyers and numerous BBC and NPR programs including “Weekend Edition Sunday” with Liane Hansen and “On Being” with Krista Tippett. She is one of the most popular and requested speakers at the iconic Chautauqua Institution in southwestern New York State.

In 2014 the Joan Chittister Lecture Series was inaugurated at Mercyhurst University, Erie, PA, in conjunction with the dedication of the The Helen Boyle Memorial Archive in Honor of Joan D. Chittister. In 2015 Sister Joan was “In Conversation” with Maria Shriver for the lecture series.

Joan Chittister currently serves as co-chair of the Global Peace Initiative of Women, a partner organization of the UN, facilitating a worldwide network of women peace builders. She was an adviser for the groundbreaking report, “A Woman’s Nation,” led by Maria Shriver (2009) and was a member of the TED prize-sponsored “Council of Sages,” an interfaith group that developed a Charter for Compassion (2009) being promulgated worldwide with all faith organizations.

She served as president of the Leadership Conference of Women Religious, an organization of the leaders of Catholic religious women in the US, president of the Conference of American Benedictine Prioresses, and was prioress of the Benedictine Sisters of Erie for 12 years. She received her doctorate in speech communications from Penn State University, the primary site of her archive collection.

Joan Chittister is a member of the Benedictine Sisters of Erie, PA. She is executive director of Benetvision, a resource and research center for contemporary spirituality and the founder and animator of Monasteries of the Heart, a web-based movement sharing Benedictine spirituality with contemporary seekers.